► Live-streamed sessions with an official guide at all times of the year.
► Ask as many questions as you want!

► Choose the hour to carry out the activity.
► Aa professional guide as your mentor there to help you during all along the tour.
► Access to a team of advisors — available by phone and email to answer all your questions.

To fully participate, please make sure you have the following equipment:
► A desktop computer or laptop
► Video projector & screen (>15 pax)
► Speakers (>15 pax)
► Webcam & Microphone or Android phone
► A fast and reliable internet connection 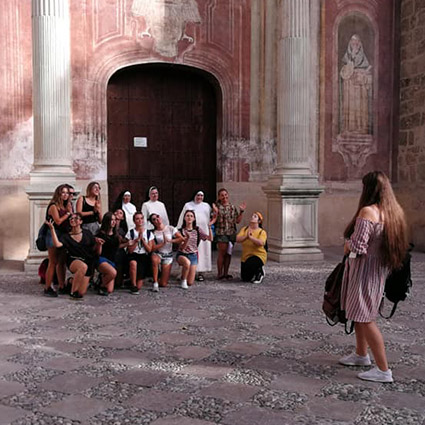 Christian Granada
Participants discover the city through a guided tour of Christian Granada, following in the footsteps of the Catholic Monarchs after the surrender of the Alhambra.
While the guide tells the history of the place on his phone, the participants admire the magnificent monuments of the city and interact with the inhabitants of the neighbourhood.

Objectives
To bring students closer to this period of change for Humanity with the discovery of the Americas, the same year as the conquest of the Alhambra, which turns the centre of Granada into a privileged witness of this transition reflected in its most striking monuments. This visit becomes an educational resource to appreciate its natural, artistic, historical and heritage value.

About the Tour
Enjoy a live-stream from the Alhambra considered the main reference of Hispanic-Muslim architecture, the Alhambra of Granada is the only Islamic palatine city that has remained practically intact until today.
An official local guide will show you this fantastic monument, going through its gardens, courtyards and main palaces.

Who is it for?
This tour is designed for all students that share an interest in finding out more about the “Pearl of Andalucia“. You will learn about the history, architecture and art surrounding the monument.

How does it work?
Once you have confirmed the reservation by a 30% deposit you will reveive by email the link and details on how to join.

The remaining 70% due will be paid 3 days AFTER THE ACTIVITY is carried out.
Note: few days before the activity we will test the connection and the equipment (computers, webcam, audio,…).

On the day of the tour
During the visit participants can have a chat with our guide and could ask any due or comment on any aspect which you are interesting in.

Covid-19 Measures: This activity can be carried out respecting the sanitary recommendations in terms of protection and safety to avoid the contagion of the Covid-19 virus; masks, social distance and ventilation of the room where the workshop is held.

Request a free quotation for a Alhambra tour or COMBINE WITH OTHERS ONLINE EXPERIENCES.

FREE CANCELATION:
Refund of the deposit (30 %) within 72 hours before activity starts.

AFTER-ACTIVITIES PAYMENT:
Final balance (70%) is due after the activities are completed.

FREE DATE MODIFICATION
Free! Modify your date of visit free of charge up to 72 hours before the activity starts.

IF YOU VISIT GRANADA